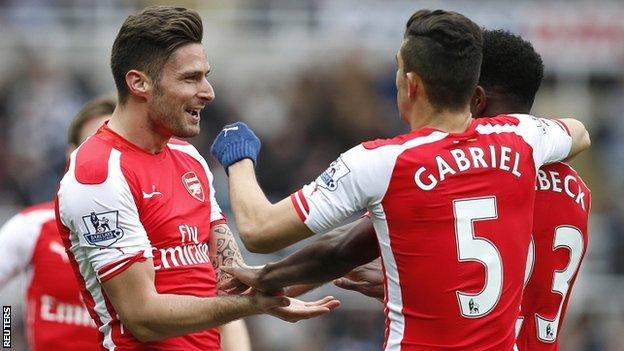 Arsenal resisted Newcastle's second-half fightback as they continued their pursuit of second-placed Manchester City with a sixth successive win.

He poked in his first from Santi Cazorla's free-kick before heading in a corner for his 17th of the season.

Any Newcastle hopes that the Gunners would suffer the after-effects of Tuesday's Champions League exit were extinguished in a first half in which the visitors could easily have been four goals ahead.

Despite being without Mesut Ozil, they did not miss the German playmaker as Giroud again linked up well with Alexis Sanchez and Danny Welbeck to score his ninth goal in as many games.

If only Newcastle could call on the same firepower. Newcastle manager John Carver witnessed an improved second-half display from his side, but without injured top scorer Papiss Cisse and suspended defender Fabricio Coloccini, they slipped to a fourth defeat in the last five games.

Carver spoke earlier this week of a player "clear-out", which did not seem to lift his team in a woeful first half. In fact, they were closer to the description of Match of the Day pundit Phil Neville, who said many of them were already wearing flip-flops in anticipation of the summer break.

Arsenal took advantage of their sluggishness with some ease.

Giroud was a tad fortunate for his first goal as Welbeck flicked on Cazorla's free-kick and the Frenchman seemed to score via his knee. The second showed his strength as he held off Mike Williamson to nod in Cazorla's corner.

Aaron Ramsey, in the side to replace Ozil, inadvertently denied Giroud a first-half hat-trick when he diverted a low cross out of his team-mate's path.

The Newcastle supporters booed off their team at half-time but they saw a transformation at the start of the second period.

We are not on summer holidays yet - John Carver

Cabella was heavily involved as he first set up Sissoko's goal with a clever cut-back. He then teed up Yoan Gouffran, who could only poke straight at Ospina, with Sissoko almost troubling the Colombian from close-range following a corner.

As Arsenal tired, Jonas Gutierrez, who returned to action earlier this month after overcoming testicular cancer, came on to further boost his team-mates.

But Ospina denied Newcastle a point when he saved well with his legs to stop Cabella's deflected shot.

Despite losing, Newcastle at least ended the game strongly and their fans will hope they show the same effort in the Tyne-Wear derby at Sunderland after the international break.

Newcastle boss John Carver: "It's dead easy to disappear in a stadium like this. I told the players at half-time: 'Be proud of what you do and wearing the shirt, give the fans something to shout about' and we did that. As soon as we got on front foot, the game and the stadium came alive.

"People said we had our flip-flops on but if you saw our second-half performance that's not the case. I'll keep driving them on, they want to work and keep having a go."

Arsenal boss Arsene Wenger on whether he was concerned by the difference between his side's first and second-half displays: "No, not at all. We played one game in Manchester, one at home to West Ham, one in Monaco on Tuesday and now here so that's three away games in two weeks. I'm proud of the performance we put in today.

"We want to finish as high as we can, we have 60 points with eight games to go. If you look at the points we have taken in the last three months, it has been outstanding, so we just want to win and win and win."

Shots on Target
Home4
Away3

Navigate to the next pagesrc="https://next

Navigate to the last pagesrc="https://forward